Following the virtualisation project carried out by M-Tech in Summer 2016 at Debden Park High School, sister school King Harold Business & Enterprise Academy embarked upon their virtualisation journey a few months later. Both of the Essex-based secondary schools are part of the TKAT Multi-Academy Trust and managed by the same IT team.

Giles Eadon, Senior Technical Consultant, implemented the project during February half term 2017. Existing hosts were repurposed to provide a virtualisation and back up/disaster recovery platform. This use of existing equipment makes the best possible use of the current resources and available budget. A further server was also repurposed and virtualised, giving greater storage capacity to the school, future-proofing against data growth.

DataCore SANsymphony software was used to provide hyperconvergence throughout the server infrastructure. Hyperconvergence is a software-centric architecture that integrates compute, storage, networking and virtualisation resources across a single piece of hardware. 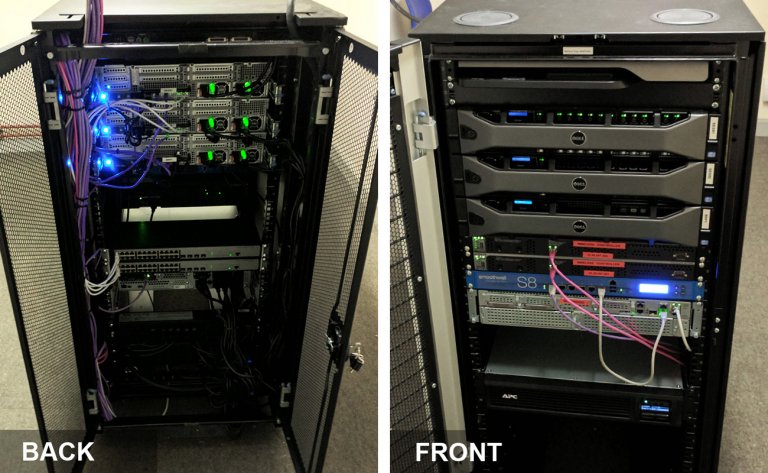 A further Dell server was used as a backup proxy, using resource from the remaining host, but adding some new disks to give on-site backup and disaster recovery. Veeam software was installed to not only back up the data but all the server configuration, enabling both individual files to be recovered as well as entire virtual machines. Due to the same system being in place at the sister school, there is now the option available to replicate this back up off site at Debden High School, and vice versa.

To protect against power issues, a UPS was added to the solution, also enabling smart shutdown of the hosts throughout the site.

King Harold now have improved availability and efficiency, along with a stronger business continuity plan. Alongside the virtualisation, Giles streamlined the school’s PC imaging by using the Microsoft Deployment Toolkit (MDT), enabling the automation of desktop and server deployments.

Now both schools are virtualised, the second stage of this project will commence in the Easter holidays, switching both schools onto fully managed systems with RES ONE Workspace. This goes far beyond profile management and gives IT the control to centrally manage and secure apps and services site-wide.

If you’re in need of virtualising the estate at your school or business, drop us a message and we’ll be happy to have a chat.